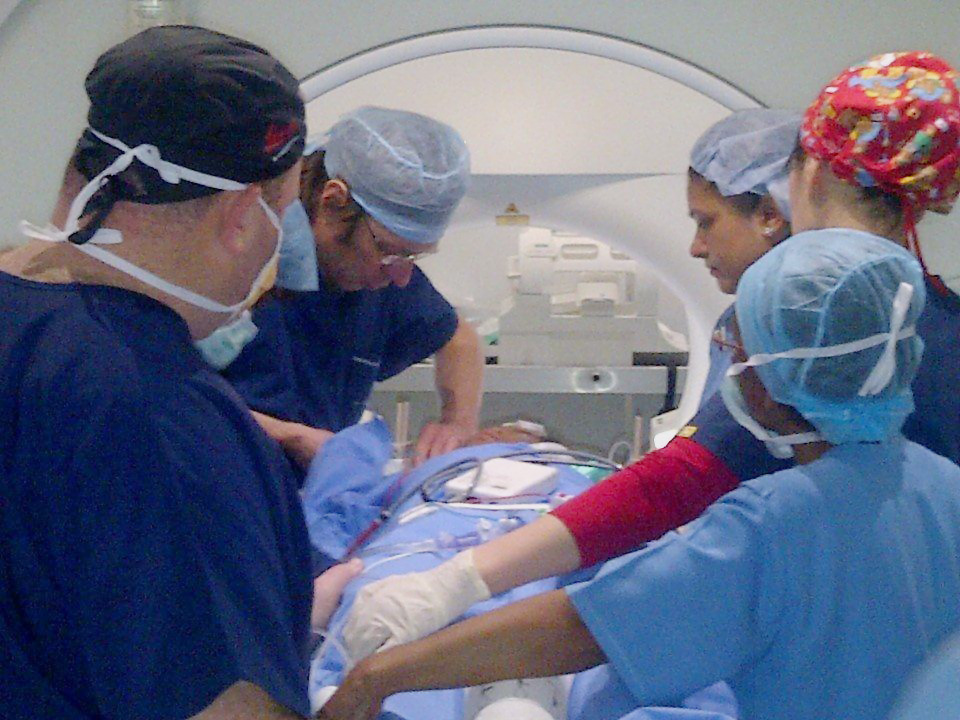 A uniquely designed special motorised door separates the theatre from the MRI suite, only operable from the neurosurgical suite side.

The patient is positioned onto a special table which is compatible with both the operating table and the scanner table facilitating movement of the patient between the neurosurgical suite and the mri scanner maintaining the exact surgical and imaging positions.

This is done before anaesthetising the patient , and positioning between sugery and imaging during anaesthesia are exactly the same, which allows for repeat scanning during surgery without changed positions easily and quickly, so there are no lesion positional changes due to intraoperative brain deformation movements. 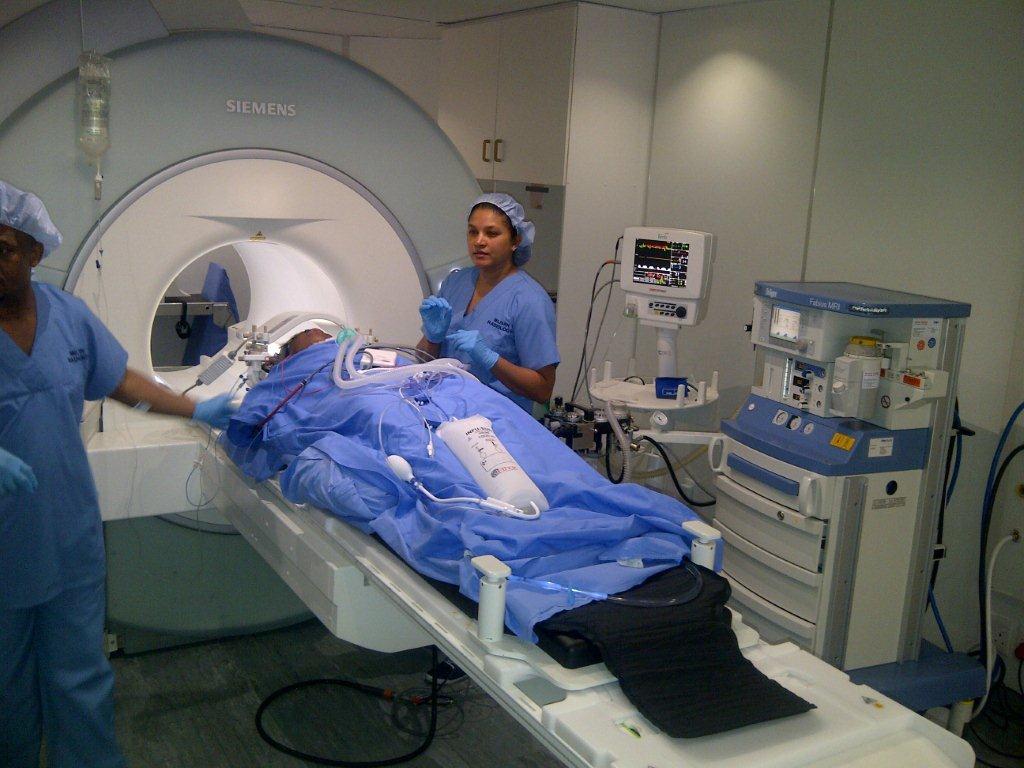 The neurosurgical suite and MRI suite have special positive pressure air conditioners so sterility is maintained during transfer between the surgical and imaging suites Specialised anaesthetic controls maintain patient support in transferring the patient safely between the 2 facilities.

WHAT IS INTRAOPERATIVE MRI?

In most intraoperative MRI cases the patient will already have had imaging done to determine the size, position of the lesion, enhancment characteristics, tractography if necessary to show the neurology tracts related to the lesion,and if necessary, functional imaging to detect regions of eloquent brain relatedto the lesion to be resected.

This allows for safer lesion resection, gives a better guide to avoid related neurological tracts which may be affected.
Brain lesions may be difficult to distinguish from adjacent normal brain. The neurosurgeon thus relies on anatomical landmarks in guiding resections. These are frequently deformed after craniotomy because the brain changes shape during surgery, particularly with large tumours.
The average amount of displacement has been reported to be lcm.

Intraoperative MRI is typically performed after the surgeon has removed as much of the tumour as possible with no neurological deficit.
The sequences utilised include those which best depicted the lesion on preoperative scanning, may be with / without contrast depending on the lesion type.

The availability of this facility allows for more complete and safer lesion resection than previous! techniques which did not have the facility to reassess the extent of the residual lesion intraoperatively.
Previously imaging after surgical closure demonstrated some of the lesion remaining which would require repeat 2nd surgery,with its allied anaesthesia and associated risks to resect residual tumour. This second operation is­­ avoided due to imaging during surgery to allow for better localisation and lesion resection in case brain movement and subsequently lesion movement occurred intraoperatively.

If further pathology is detected the patient is returned to the operating suite for further resection, under the same anaesthesia and surgical sitting.
If not, the operation is completed and no further imaging required.
Better more complete tumoral resection occurs due to this intraoperative imaging technique.

Tumours, both primary and secondary. The surgical removal of glioma’s and glioblastomas is a common indication. These malignant brain tumours are best treated by the most complete resection possible.
Pituatary adenomas are also a common indication for intraoperative MRI.
These are usually approached by a trans-sphenoidal route.
Epileptic foci can be obliterated.
Vascular malformations such as cavernous malformations, AV malformations and AV fistulae can be resected.
Intraoperative MRI can also be used to check for complications such as bleeding or ischaemia.